Maaret fiercely loved everything that lived so it was to be expected that when the oak tree in her neighbor’s front yard was in danger, she would grab hold of it and refuse to let go. Her small arms barely reached halfway around its massive trunk. Her fingertips dug into the crevices between the thick chunks of bark. If the tree had been a pine or a maple with their flaky outer sheaths, she would expect those pieces to come off in her hand. The oak bark held firm with a strength that she believed extended all the way from its heartwood to its coarse surface. Maaret felt its vitality in her chest pressed against the bark and in her cheek resting in tree moss. Its rich and earthy perfume took her back to a forest from her childhood, the wrinkled texture reminding her of age and youth and her youth and the trees of Finland and the forest spirit Tapio with his lichen beard and his mossy eyebrows.

“Ma’am,” said the policeman who stood behind her. “You’re gonna have to let go.”

“No,” her voice cracked. 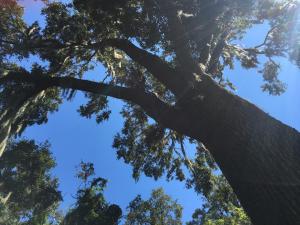 She tilted her head back to see the underside of leaves tremble in the wind.

In Finnish myth, Tapio ruled the forest. Hunters prayed to him before disappearing into the woods armed with crossbows and prowess. As king of the forest, Tapio protected the woods and all that lived there. Maaret imagined his anger at the destruction of a tree of this stature.

But Tapio wasn’t here. Finland was an ocean away and the myths of the forest were even further. A prayer to a forest spirit would not protect this ancient oak.

One of Maaret’s neighbors standing on his front porch cleared his throat, so loudly that everyone gathered around could hear.

She closed her eyes to wish him away. She focused on the rustle of leaves and the twittering of birds. The oak’s broad branches provided shelter for a myriad of robins and squirrels and chipmunks, not to mention bugs, one of which tickled Maaret’s arm as it sped toward her elbow. She let it crawl unimpeded.

A few years back, this oak had neglected to provide acorns. Her next-door neighbors had been so happy that their fancy cars weren’t getting pelted that they never considered the amount of stress the tree must have been under for it to fail to seed.

Maaret had waited until one night when their cars were gone. She snuck over with a bucket of water infused with fertilizer and poured it around the base. She had talked to the tree and stroked its trunk.

She had been in the midst of her ministrations when car lights had appeared at the corner earlier than she had expected. Maaret ducked behind the tree trunk as her neighbors pulled into their drive. Too late, she realized that she had left the bucket in plain view. She held her breath and thought about darting out and grabbing the bucket then diving into the bushes. Or maybe she should just step out and confess. No one in their right mind would be angry about a neighbor simply caring for a tree.

While Maaret had struggled with what to do, the couple got out of the car and argued about the relative merits of tapas all the way to the front door.

The next fall the acorns were abundant.

“Ma’am. Really. You need to let go,” the police officer repeated. “If you don’t, I’m going to have to arrest you.”

“It’s just a tree, ma’am. And it’s on your neighbor’s property. They have the right to cut it down if they want to. Don’t make me arrest you.”

Maaret turned her head so she could see the policeman standing with his feet apart. His hand rested on his utility belt. Behind him, was a work truck with a wood chipper on a trailer behind it. Three men waited with ropes and a ladder. One threw a cigarette on the ground and stepped on it. He said something in a language she didn’t understand and the other two laughed.

She looked up the long trunk of the tree. If she had just had one of those ropes, or even a long ladder, she could be sitting on one of the branches right now. Then the police wouldn’t be able to arrest her.

She had read stories about people in the Northwest who had lived in trees for weeks or months or even years just to save them. She breathed in the warm, sweet smell of the moss. She could live in a tree with the squirrels and birds. It made sense. What she couldn’t fathom was why her neighbors would want to kill something so lovely just to make a wider driveway for more cars that they didn’t need. Asphalt was harsh and hot.

She felt the policeman’s fingers on her wrist. He pried it away from the tree trunk and put the metal ring of a handcuff around it. He pulled her arm behind her back and reached for the other wrist.

Once her hands were secured behind her back, he walked her over to his car, put her in the backseat and shut the door. He gestured to the tree men that they could get started and joined her neighbors on the front porch.

The neighbors were speaking angrily to the policeman. He shook his head and said something in response. They pointed to Maaret’s house and the trees in her front yard.

In the police car it was hot and stagnant. Very little air came in through the open front window and by the time it reached the caged-in back seat its crisp autumn scent had been overcome by fake pine from a dangling air freshener. The vinyl seat stuck to the backs of Maaret’s legs. The radio crackled.

The policeman approached the car. He got into the front seat and started the engine. He rolled up the window and turned the air conditioner on high.

“You okay back there?” he asked putting the car in gear.

He drove to the stop sign at the corner and did a u turn in the intersection.

They passed the tree once again and fifteen feet later, he pulled into Maaret’s driveway. He got out of the car and opened the back door for her.

The chain saw buzzed at its harshest. She smelled fresh cut wood and diesel.

The policeman walked with her to her front door. Pulling the key from his belt, he unlocked the handcuffs.

Rubbing her wrists where the metal had been so tight, she knew she should thank him for letting her go but she couldn’t bring herself to do it.

He ran a finger under the lens of his sunglasses as if wiping a drop of sweat from under his eye.

She briefly wondered if it really was sweat he had wiped away. He left her standing on her front porch and walked back to his car. She nodded and went inside.

In April of this year, the mother of my friends June and Paul passed away. At the memorial service, June told a story of how her mother was the only person that she knew who was actually arrested for hugging a tree. She added that the policeman was very kind and rather than taking Maaret to jail, he simply gave her a ride home. This idea was the genesis for this story. The rest of it is from my imagination.

One thought on “The Tree Hugger”